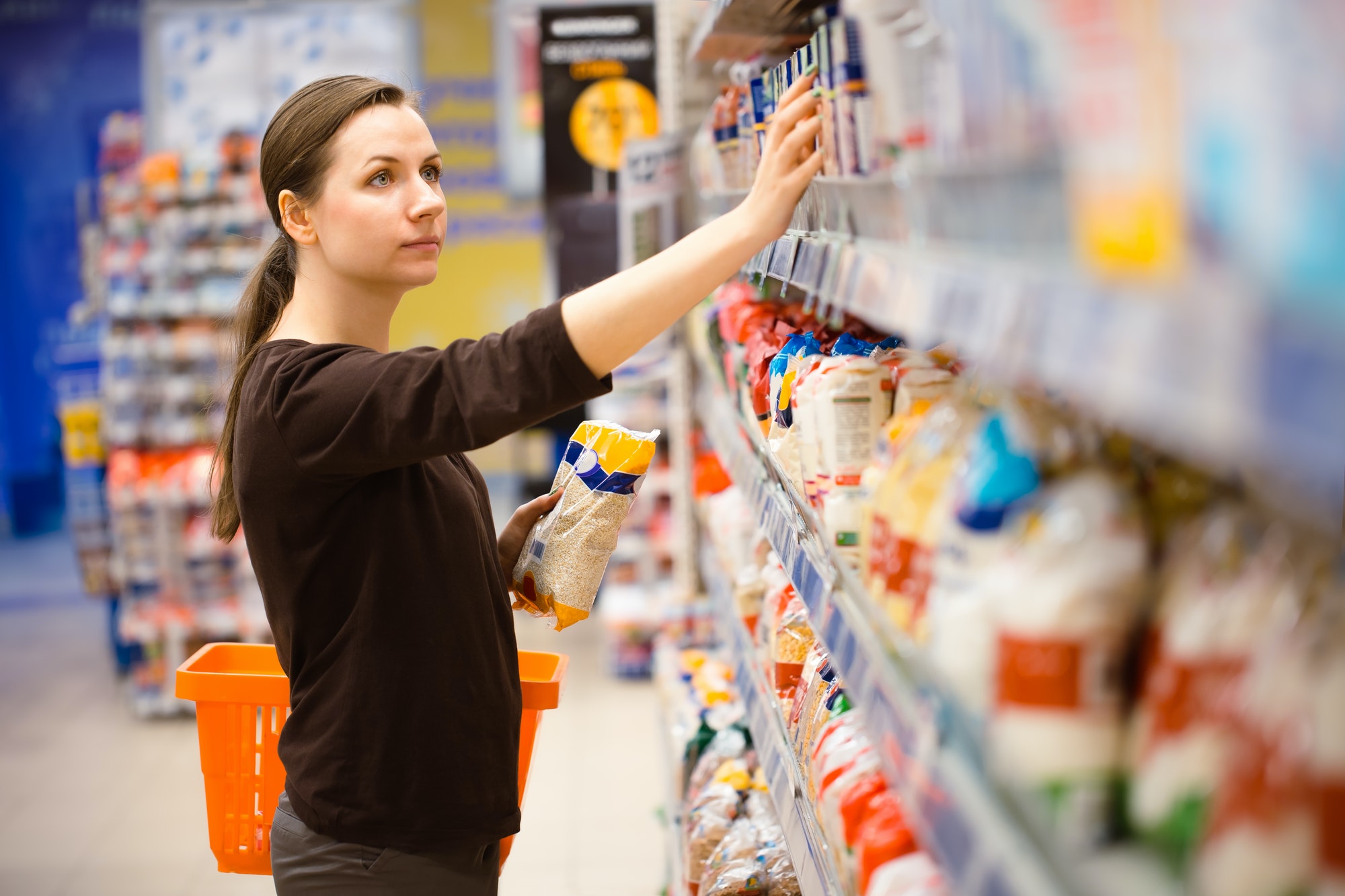 Kroger is not only one of the most recognizable names they also own over 2,500 different grocery and multi-department stores under 17 different business names.

Kroger is an American supermarket company, founded by Bernard Kroger in 1883 and is currently owned by David Dillon. Kroger has more than 2700 locations and is the 2nd largest grocery chain in the United States.

Over the years that have acquired or created different brands that makeup one of the largest retail companies in the US. With few exceptions, most of the Kroger-owned grocery stores run the same type of sales and advertising. The Kroger line consists of many acquired stores along with the original grocery stores that go back to its founding in 1883.

The name and color scheme of Kroger has become quite familiar across the US. Plus, the marketing for most of its grocery stores has become uniform and directed from the headquarters which is in Cincinnati, Ohio. What follows are the stores and chains owned by Kroger.

A popular chain of grocery stores across Nebraska, the company was founded in 1927. They were purchased by Kroger in 2001 for roughly $200 million. Baker’s Supermarkets are quite similar to Dillions and Gerbes in terms of the type and frequency of ads that they run for store promotions.

City Market was founded in 1927 and has 38 stores across Colorado, New Mexico, Utah, and Wyoming. For its first 77 years, a member of the founding Prinster family was president of City Market. However, in 1969 the company was purchased by Dillons, and then it was acquired by Kroger in 1983.

One of the older grocery stores under the Kroger line, Dillons was founded in 1913. Located in Kansas, the grocery stores grew in prominence and even purchased City Market in 1969. However, Kroger managed to acquire Dillons and its line of stores in 1983 for approximately $750 million. Today, Dillons still has its own private label for milk which comes from Hutchinson, Kansas.

Food 4 Less became quite popular in a short time since its founding in 1977. A type of “no-frills” grocery store that features low prices and where customers must bag their own groceries, Food 4 Less was purchased by Kroger in 1988, just 11 years after its founding. Today, you can find 41 Food 4 Less grocery stores across California, Indiana, Ohio, and Illinois.

A popular grocery store chain across the Pacific Northwest, Fred Meyer was founded in 1931. Today, it consists of 132 stores that can be found in Alaska, Idaho, Oregon, and Washington. In 1999, Kroger purchased Fred Meyer for a whopping $12.8 billion. However, Fred Meyer still keeps some of its autonomy. Most notably by having its own reward card and a play area for children which sets it apart from other Kroger-owned stores.

Founded in 1954, Fry’s Food & Drug is arguably the most recognizable grocery store in Arizona. With 123 stores within the state, including Fry’s Marketplace which is a combination grocery and multi-department store, it was acquired by Kroger in 1999. Today, Fry’s Food & Drug also includes Fry’s Mercado and Fry’s Signature as part of its company.

Gerbes Super Markets is one of the older grocery stores in the Kroger family. Founded in 1933, the 8 stores are all located in Missouri. The company was originally obtained by Dillons in 1966 before being obtained by Kroger in 1983 as part of the $750 million purchase.

Harris Teeter is well-known along the Atlantic Coast. Operating 248 stores across Delaware, District of Columbia, Florida, Georgia, Maryland, North and South Carolina, and Virginia. The company itself was founded in 1936 and was only acquired by Kroger in 2013 for $2.5 billion. Harris Teeter retains much of its autonomy, offering a different website and digital account.

With 64 stores located across the southern region of Indiana, JayC Food Store is one of the most well-known grocery stores in the region. Founded in 1862, making it the oldest in the Kroger line, the store managed to maintain its independence until 1999 when it was finally purchased by Kroger. Interestingly enough, since 2018 a JayC Food Store has been part of the Louisville Division of Kroger.

With 152 stores across Colorado and Wyoming, King Soopers Food Store is one of the most recognizable grocery stores in the two states. Founded in 1924, the company was originally purchased by Dillons in 1957. King Soopers became part of Kroger’s 1983 acquisition of Dillons in 1983 as part of the $750 million deal.

With its headquarters in Cincinnati, Ohio, Kroger runs 1,323 stores across the US. Its sheer size and number of acquisitions make it the 17th largest company in the US. Because of all its acquisitions, the Kroger grocery store itself has become part of its own line of retail stores.

Founded in 1959, Owen’s Market consists of four stores that can be found across the northern section of Indiana. It was obtained by Kroger in 1997 and for over 20 years managed to keep its name and some of its autonomy. However, over the past couple of years, Owen’s Market has essentially become Kroger in virtually every way.

You can find 8 Pay Less Super Markets across the central area of Indiana. It was originally founded in 1947 and became part of the Kroger family in 1999. The acquirement by Kroger was unusual since it was a cash deal for an undisclosed amount. Pay Less Super Markets are the only line of Kroger stores that does not run a weekly advertisement for its products.

One of the older stores that are part of the Kroger line, Ralphs was founded in 1873. It offers 200 stores across California and was purchased by Kroger in 1998. The nearly $13 billion deal included the Hughes Family Markets as well. Ralphs is just behind Harris Teeter and Kroger itself in terms of the number of stores.

Founded in 1911, Smith’s Food and Drug is one of the more popular stores in across Arizona, Idaho, Montana, Nevada, New Mexico, Utah and Wyoming. Consisting of 132 locations, Smith’s Food and Drug was originally purchased by Fred Meyer, and then it was acquired by Kroger in 1998. It was obtaining Fred Meyer that made Kroger the largest grocery store company in the US.

Who is the Founder of Kroger?

The Kroger Company as it is officially known was created by Bernard Kroger in Cincinnati, Ohio in 1883. Today, it is only behind Walmart as the second largest general retailer. By its total revenue, which was just over $121 billion for 2019, Kroger is ranked #23 on the Fortune 500 list of American corporations.

Currently, the largest subsidiary of Kroger is the grocery chain Ralphs in California.

Kroger began with Bernard’s investment of $372, which is the equivalent of $10,000 today, to open a single grocery store which was located at 66 Pearl Street in downtown Cincinnati. By the following year, the success of his first grocery store led Bernard to open a second location.

By 1902, the Kroger Grocery and Baking Company had become incorporated. Kroger became the first grocery store to have its own bakery for its locations. In less than 20 years, the company had grown to over 40 stores and is has kept expanding ever since.

In addition to the aforementioned stores, Kroger’s also operates 1,603 fuel centers that are part of its supermarkets, 2,254 pharmacies which are mostly inside the Kroger stores, 224 in-store medical clinics which are known as The Little Clinic. And 35 manufacturing or food processing facilities.

The brand has not always been growing as Kroger recently sold 782 convenience stores to EG Group back in 2018. However, the chain itself has been growing steadily, especially with the acquisitions made in 1998 and 1999. Kroger has managed to obtain stores from coast to coast in the lower 48 states. The future of Kroger is one of growth and maintaining its massive number of stores and employees.