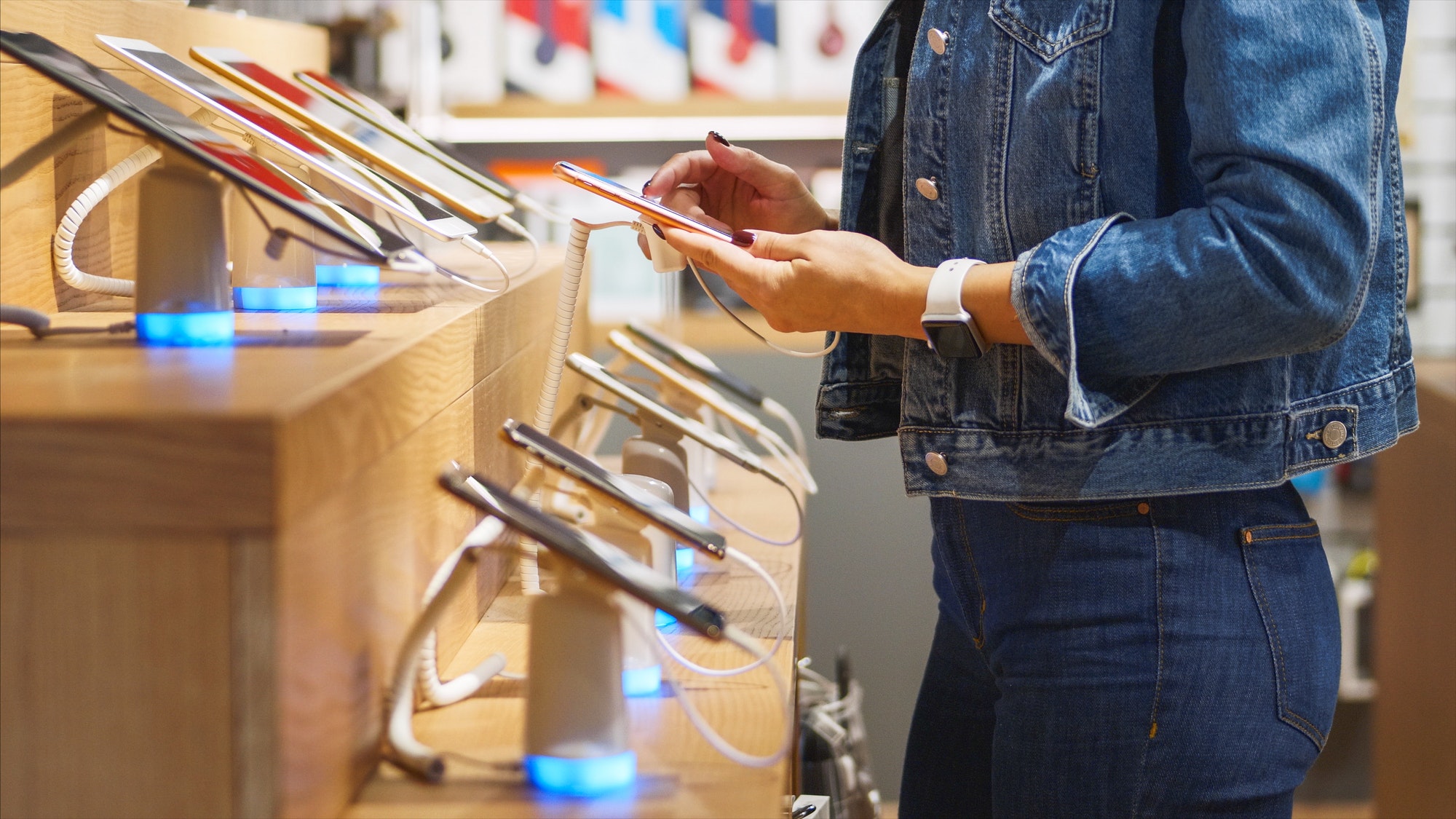 Steve Jobs was a corporate magnate, industrialist, designer, and businessperson from the United States. He owned many companies but particularly is known for his innovation of Apple.

Apple was founded on April 1st, 1976, by Steve Jobs and Steve Wozniak, these two had dropped out of college to start a company that focused on making computers that were of exceptional quality.

Steve Jobs’ mission for the company, was to create appealing and competent goods for consumers.

Jobs carefully examined the market and attempted to gauge the mood of the audience, which has been proven to be a success.

Apple is without a doubt one of the most successful and inventive tech businesses in history. Apple’s success is due in part to its dynamic, ever-changing corporate strategy.

Apple is best known for producing smartphones, tablets, computers, and other electronic gadgets.

The production is done in Cupertino, California, where the company’s headquarters are still currently located.

In 2021, Apple’s net worth will be $2 trillion due to the mass expansion that the company has taken place globally and its fast innovative technology.

Few people, however, are aware of the number of acquisitions and mergers Apple had to make to get to where they are now.

Although Apple appears to be always on top of the innovation game. The majority of Apple’s most innovative products have resulted from mergers.

Since 2007, C3 Technologies has developed extraordinarily high-quality and detailed 3D maps. The camera-based 3D mapping technique detects buildings, dwellings, and even smaller things such as trees.

Apple blasted off and left its competition in the dust with the acquisition of a superb 3D mapping business and bought C3 technologies for $267 million.

Founded in 2006, Quattro Wireless was a mobile ad company that specializes in phones, tablets, and other technologies.

Apple bought Quattro Wireless in 2010 for $275 million. With this purchase, Apple was able to improve its advertising in terms of mobile use.

Daniel W. Dobberpuhl created and founded P. A. Semi in Santa Clara, California in 2003 as a fabless semiconductor firm.

In 2008, P.A. Semi was sold to Apple for $278 million. P.A. Semi has powered every iPad and iPhone since 2010 and is still an exceptionally large and important part of Apple’s company.

Mapsense Technologies allows users to slice and dice graphical models of maps that carry massive amounts of data with the company’s service.

Mapsense Technologies is cloud-based and was bought by Apple for $30 million in 2015.

This programming is now incorporated in Apple maps and is used to gives instructions and estimated arrival times for navigation by car, foot, and public transportation.

Orion Network Systems is a private company that was founded in 1982 and provides satellite communication services in the United States.

This was one of Apple’s earliest acquisitions as they purchased the company’s software in June 1988. The amount has stayed disclosed for security and privacy reasons.

Apple recently bought Orion for its SNA networking software skills in 2015, this software is now available throughout major Apple products.

Apple bought StyleWare Inc. in 1988 and uses its software along with Orion Network Systems with most Apple products.

Claris International Inc, originally FileMaker Inc, is a software development business that was founded in 1987 as a subsidiary of Apple. This company, produces FileMaker, a cross-platform relational database program.

It focuses on a database engine with a graphical user interface and security safeguards. This allows users to edit databases by dragging new pieces into layouts, screens, or forms.

Founded by Adam Grossman in 2012, Dark Sky is an app that allows users to know the weather and any changes that will occur, usually within minutes.

Dark Sky is the highest-ranking weather app, due to is that it has astounding precision in its ability to predict weather conditions, according to multiple accounts.

This caught Apple’s attention and was bought in 2020 for a disclosed amount and is now available to download through the Apple IOS system.

The firm was started in November 1993. Power Computing created the first Mac-compatible PC that was released. Power Computing, like Dell Computer, used a direct, build-to-order strategy.

In 1997, Apple bought all of Power Computing’s technology for $100 million and has been the core of all Mac computers.

Founded in 1968, Intel is a huge company that provides many distinctive features and functions such as, manufactures, and distributes computer components and accessories.

Apple bought the majority of Intel’s products and business for $1 billion (about $3 per person in the US).

They took the majority of Intel’s smartphone modem division.

This enabled Apple to get some patents, equipment, and intellectual property as part of the agreement, which also added on 2,200 Intel employees

Apple bought Raycer Graphics in 1999 for $15 million and now uses its graphic chip in Apple products and design.

Founded in 2011, Mobeewave is Canadian-based and has created a mechanism for accepting contactless payments.

This lets customers make a payment by tapping their credit card on the back of another smartphone.

When paying using a credit or debit card, the transaction is completed utilizing the phone’s NFC technology or receiving the money.

Apple bought Mobeewave for $100 million in 2020 and uses its new contactless payment in Apple products, making it extremely useful in current times.

LinX Imaging is an Israeli camera technology business, that focuses on microscopic multi-aperture cameras that are half the size of normal mobile cameras and can produce beautiful color photos with high resolution.

LinX has been purchased by Apple for around $20 million in 2015. LinX is a company that specializes in multi-aperture camera technology for mobile devices.

This technology was utilized in newer IOS products.

Polar Rose was a facial recognition software firm based in Malmö, Sweden. This company offered a service that allowed users to utilize their Facebook friends to name people in their images on photo sharing sites like Flickr.com.

Although the service was shut down on September 6, 2010. Apple bought it back two weeks later for an estimated $25-29 million.

Beats Electronics, based in Culver City, California, is a manufacturer of consumer audio equipment. Dr. Dre, a music producer, started the company in 2006.

They specialize in making headphones, earphones, and other audio devices. Beats is known for creating high quality audio equipment and is highly rated globally.

Apple bought Beats Electronics in 2014 for $3.2 billion (about $10 per person in the US), making it the company’s most costly acquisition to date.

Shazam is a smartphone app that can recognize music, movies, commercials, and television episodes based on a short sample played through the device’s microphone.

Shazam Entertainment was based in London and created in1999. Due to its popularity and worldwide usage, it was later sold to Apple in 2018 for $400 million.

Now Shazam can be used on Android, macOS, iOS, Wear OS, and watch OS, these are all supported by the software.

This caught Apple’s attention and was bought in 2021 for $500 million. Now Anobit’s technology is incorporated in all of Apple’s products and is a core element when making Apple products.

Dialog Semiconductor was created in 1985 and is European based, founded by Rich Beyer. And is known for its power management technology

Apple has always had a relationship with Dialog Semiconductor and bought them for $600 million in 2018.

Apple was able to strengthen its power management and chip technology by acquiring some of Dialog Semiconductor’s assets.

AuthenTec, a firm that makes fingerprint sensors, created technology like touch ID, and Apple jumped at the chance to use it in mobile devices.

Apple bought AuthenTec for $356 million and uses its technology in all its apple products.

Apple has been extremely protective of this one merger, and the implication of that caution has served Apple well in recent years.

PrimeSense was founded in 2005 and specialized in Face ID recognition, which caught Apple’s attention. Apple then bought PrimeSense in 2013 for $360 million and has now been used in most Apple products that have Face ID technology. PrimeSense can also be thanked for its TrueDepth technology.

Does Apple Own Network Innovations?

No, although Network Innovations was one of the first acquisitions made by Apple, it was sold in 2013 and is no longer in use.

Does Apple Own Silicon Grail Corp?

No, Silicon Grail used to be a compositing software firm that catered to filmmakers and post-production specialists.

Does Apple Own Nashoba Systems?

No, Nashoba Systems used to be a file maker system that allowed consumers to save and create files. This was bought in 1988 and has been renamed as Claris International. Although using the same technology they got rid of its main employees and changed the core of the system.