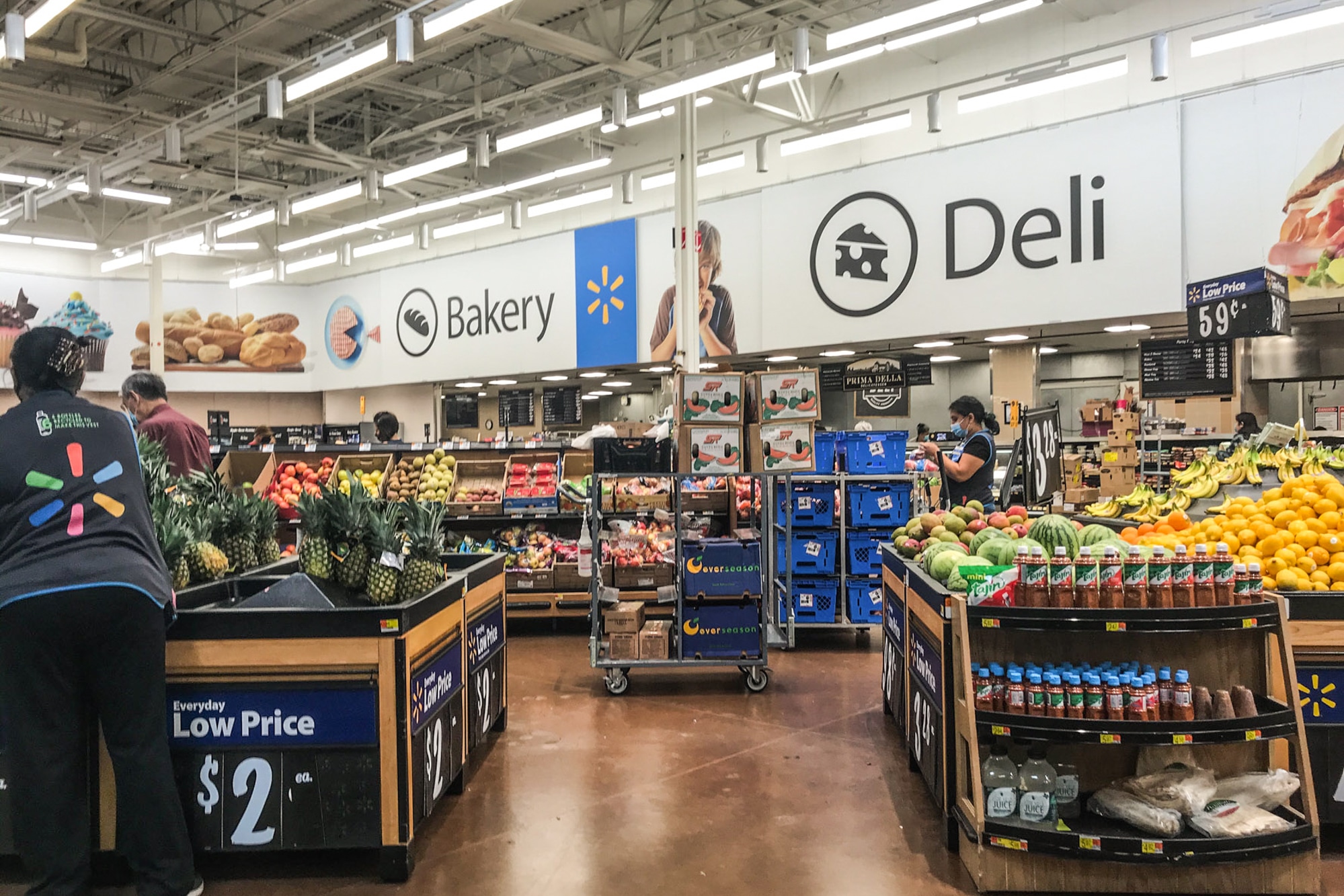 If you’re planning a backyard get-together, birthday party, or any large event and need to feed several people, then sandwich trays are a convenient, cheap way to go.

You can order catering trays in advance for the number of people you need and save yourself prep time and cleanup time. Several large box stores like Walmart have delis that offer affordable catering options.

Walmart Deli has made-to-order food trays, snacks, and platters for any occasion. Ranging from about $5 for a rotisserie chicken to $50 for a meat and cheese tray, Walmart deli has options at every price point.

Whether you need to feed five or five dozen people, most Walmart deli platters come in small, medium and large so you can order the right amount of food. Walmart deli offers hot and cold food options as well.

Walmart really is a one-stop shop for everything you need. They aim to give you the best value for your money, and this includes their deli.

Walmart’s sandwiches and deli tray options are relatively inexpensive compared to other delis. Plus, Walmart is cheaper if you want smaller quantities of their deli platters.

Walmart’s deli has various sandwiches, meats and cheeses that you can use for any occasion or gathering. Walmart bakery also has plenty of desserts, bread, cakes and bagels but we’ll focus on the deli items in this article. Note that Walmart also sells other fruit and veggie trays, as well as cheese and cracker trays, but this article will focus on the catered items in the Walmart deli.

Here’s a list of the Walmart deli menu, along with the cost and how many people each platter serves. Note that some of the platters come in different sizes so you can get the right amount of food for your gathering.

When ordering from Walmart deli, you get a lot of options to customize the trays to your needs. You can select what type of tray you want, for instance, if you want full sandwiches, or just meat and cheese, or only meat or only cheese. Then you can select the amount you need. For meats, you can choose from turkey, ham and deli.

Here are three of the most popular Walmart deli trays:

Marketside™ sub sandwich: Starting at just $18, the sub sandwich comes in small medium and large. The large can even feed up to 30 people.

You can choose from roast beef, ham, turkey, salami or beef bologna for your meet. Then you can select lettuce, tomato and/or onion with mayo or mustard also available.

The sub sandwich is cheap, can feed several people, and is easy to take home for dinner.

It also comes in small, medium and large and starts at just $24. This is perfect for a slightly larger gathering where you already have the condiments and rolls, croissants or bread.

Guests can build their own sandwich, which is perfect if you have guests with allergies, dietary restrictions and/or picky eaters in attendance.

Chicken wing tray: For wing-lovers, this tray is a relatively inexpensive option starting at just $18 for 12 to 16 guests. Or you can serve up to 24 people for $32.

How to Order from Walmart Deli

The hours of Walmart’s deli may vary by location, but most stores open at 7 am and close at 9 pm. Check the hours of your local store online at Walmart.com before you go.

Not every Walmart store has a deli. For instance, many neighborhood Walmarts do not have one, but most Walmart Supercenters do. Check the store locator to find a Walmart with a deli near you.

You can order the trays ahead of time and pick them up whenever is convenient for you. It’s always a good idea to give Walmart deli at least a day’s notice before you need to pick up your order.

That way, they have plenty of time to get it ready. Some stores may even have a minimum time to give notice before an order is ready.

While the trays listed above are the most popular and common, you may also get custom orders. Many Walmart deli locations also allow you to customize your order or make special requests, as long as you give them advance notice.

You can call ahead or visit the local store to speak with an associate about what customization you’d like to make your event a success.

If you don’t love your order, then you can bring it back to the local del for a full refund. However, make sure to hang onto your receipt if you do need to return a deli item because it was unsatisfactory.

However, whether or not Costco or Walmart is a better deal depends on the type of party tray you want and how many people you need to feed. We’ll examine how Walmart deli and Costco platters compare on cost, size, and variety.

Here’s a comparison of cost on similar items at Walmart and Costco:

The price of a rotisserie chicken is about the same at both stores, but Costco’s trays feed slightly more. Additionally, the meat and cheese platter at Costco is a better deal than the Walmart meat and cheese tray for feeding 20 people.

But, if you need to feed over 20, then you’ll either need two Costco platters or go with the Walmart large meat and cheese tray.

Finally, Costco also wins for the best price on the sandwich platter which can feed more people for less money than the sandwich trays at Walmart.

Related: Winco vs Costco Prices | Which is Cheaper?

If you need less than 15 servings, then Walmart deli is a better deal than Costco platters because Costco caters more towards large gatherings of 20 people. Walmart deli platters can be ordered in small, medium and large to feed the size of your gathering. Costco does not appear to have the option to order platters in various sizes.

However, Costco does have a shrimp platter which Walmart does not offer. If your guests like seafood, then Costco is a better way to go. Don’t like seafood? If you’re more interested in wings, then Walmart has a chicken wing tray which Costco does not have.

Additionally, if you want just meat or just cheese on a platter then Walmart has the solution for you. Walmart has all-meat or all-cheese platters in medium and large for $34 or $48, respectively.

Costco sandwich platters include ready to eat chicken, roast beef, ham and cheese sandwiches as well as shrimp platters. Costco also has a croissant sandwich option, which Walmart does not. With Costco catering, you can order in-store or over the phone and some deli items can be ordered online. Below is a list of Costco platters:

If You Want to Use EBT

Most states only allow you to use EBT for cold food, but not hot food because it is considered a prepared food item. However, some people have purchased cold wings or food from Walmart and prepared them at home. You may even be able to purchase the empty plastic platter from Walmart for only a few dollars.