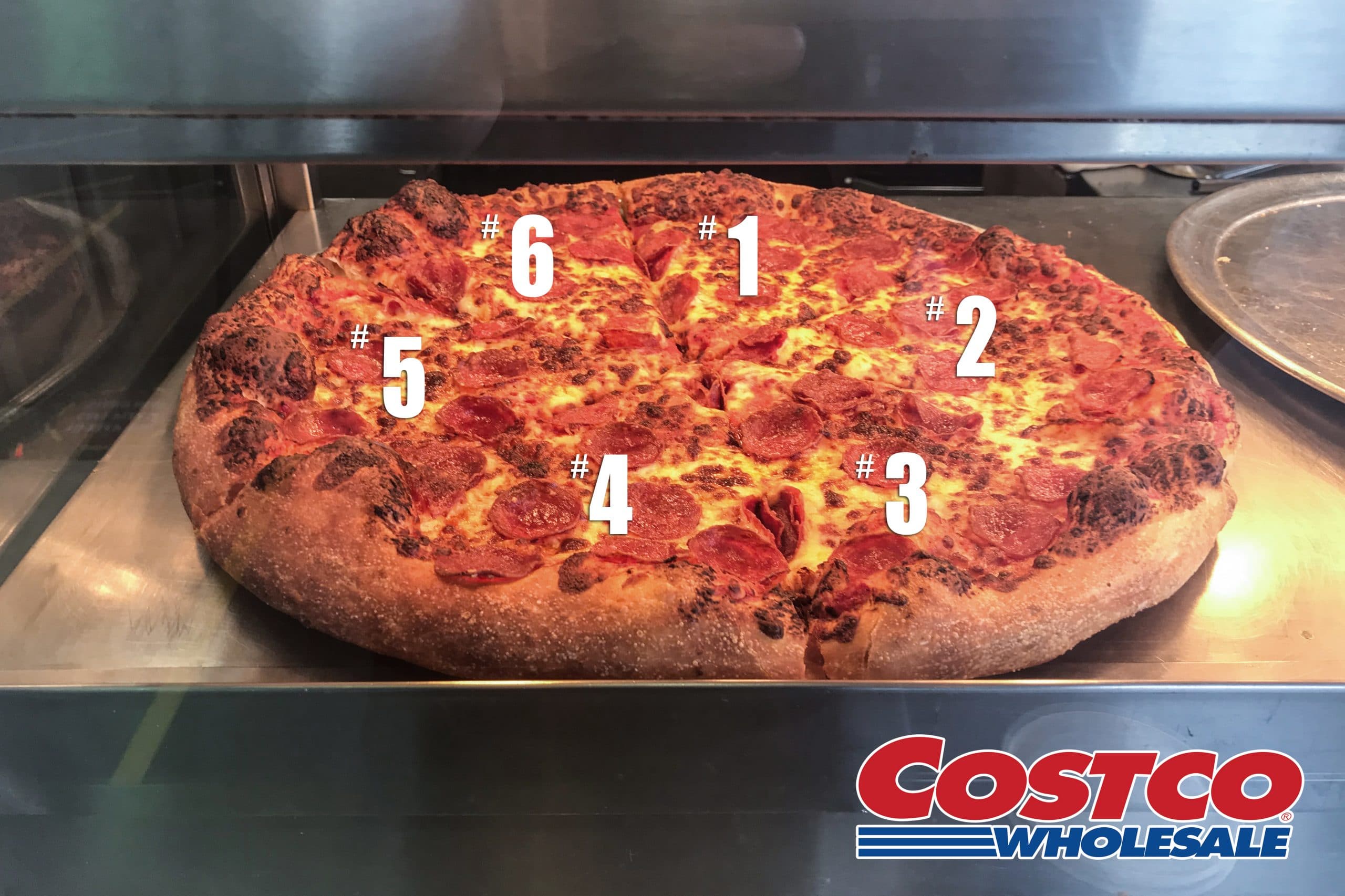 Because Costco is a large retail chain with over 700 locations across the US, you may not think of the store as a pizza outlet. However, because Costco does have a food court in all its major locations, the company is considered the 14th largest pizza chain in the US.

It is larger than California Pizza Kitchen and the number of food courts that offer pizza rivals the number of CiCi’s which is one of the most popular pizza restaurants.

This means that the company can be considered a pizza chain along with the other food their food court provides. As with similar stores, the food is often unique or branded to the store and the pizza is no exception. They currently have 2 types of pizza available and are priced per whole pizza or per slice.

Costco’s 18” whole pizza is priced at $9.95, and a slice is priced at $1.99 each. Costco whole pizza comes with 6 slices and can feed up to 6 people, one slice per person. You can choose between cheese or pepperoni without any additional cost.

Membership Update: Since 2020, Costco has changed its policy on food court purchases. Costco membership is now required to buy food at the food court. This includes pizza, hotdogs, any food or beverages.

The slice pizza price is quite attractive given the size of the slice itself. Basically, a slice of Costco pizza is considerably larger compared to what you find at most pizza chains. This does not exclude local pizza shops, but of the larger restaurants that primarily serve pizza, the size of the slices from Costco are generally larger.

Costco offers two prices for its pizza, by the slice and for an entire pizza. The simplicity of the price structure reflects the nature of the Costco store itself.

Considering that you can purchase a wide variety of items that range from vehicles to vacation packages to coffins, it’s probably not that surprising the pizza at their food courts has a similar pricing structure.

That is, everything has a bargain-basement price which reflects the philosophy of Costco regardless of the product. In terms of the pizza, that is no different. There is not a lot of variety with Costco pizza. Costco sells 2 types of pizza:

Combo Pizza Update: Costco stopped selling Combo pizza due to the Covid-19 pandemic, but this is likely an excuse to reduce the cost of manpower needed for the combo pizza process. Costco employee said this is a permanent change.

As with most food courts that serve pizza, Costco pre-bakes their pizza slices and puts them under a heat lamp to maintain their freshness until the slices are purchased.

Tip: When the line is shorter you get your food faster, but when the waiting line is longer the food is usually fresher.

Considering that 2,000 calories is recommended for daily consumption, eating two slices will almost get you there. This is one reason why so many people eat a single slice for their entire meal. Costco pizza is only 6 slices per whole pizza so each slice is bigger and has higher calories than other pizzas.

Below are the calories of Costco Pizza:

Costco Pizzas are so cheap because Costco is dedicated to pricing all their products and services competitively compared to other companies. The food court found in each Costco is no exception. The goal is to provide the lowest price possible for all products and that includes the pizza offered by Costco.

You Can Call and Order in Advance

Costco does not deliver their pizza, and you can only order by phone or if you visit the food court at Costco. This is because such a delivery service is not practical or cost-effective for the company. Plus, the competition from other pizza restaurants is considerable.

That is why Costco limits its services to pick up or carry out only and does not provide delivery for their pizza.

The phone ordering process is only for whole pizzas. Slices generally do not need to be ordered in advance since they are already prepared to be sold immediately.

You can order a whole pizza by calling the food court ahead of time and providing your information.

Everyone’s taste is different, so what may be “good” to one person may not be the same for another. What can be said is that Costco pizza is primarily designed to be affordable and filling. It is not a gourmet pizza nor is it designed to win any awards.

Some people seem to be in love with Costco pizza, and some aren’t so crazy about it. In my personal opinion, it is worth it if you’re on budget. Here is a video on why people love Costco pizza so much:

On the other hand, Costco Pizza crust is not as crisp which would be nearly impossible to give the size of each slice and the whole pizza itself. There is enough flexibility in the crust to allow it to be folded, so you can consume each slice with greater ease. However, the crust is not soggy, either.

If you enjoy a thin, crisp crust, then Costco pizza is not for you. But if you do not mind a crust that is flexible and bends so you can eat it, then it should be fine.

Even the supreme is a basic pizza that is created in the New York style. This means that the sauces are tomato-based and standard for most pizzas that you find frozen at your grocery store.

You may detect a hint of sweetness which is the sugar content of the tomatoes, but it is not overpowering. What some may not realize is that the tomato is considered a vegetable by nutritionists, but they are actually a part of the fruit family.

The cheeses that are used are also standard and there is more applied to the pizza compared to the tomato sauce. The cheese itself is of average quality which means that when cooked it has that light, greasy texture.

Not enough to be distasteful, but it is present and for those who are lactose intolerant or simply do not like any greasy taste to the cheese, then this pizza is not for you.

Because there are only three choices, the variety is not much when it comes to Costco pizza. This means that you are stuck with what they have, although that is not to say that more types will be added in the future.

Costco pizza does not have a lot of variety because Costco pizza is designed to be consumed fast for lunch when visiting a Costco. The menu expanded to cover whole pizzas when it was discovered that there was an audience for this type of pizza.

Costco pizza is pretty good. It’s not as good compared to many national pizza chains. Nor can be it compared to the gourmet pizza you find in your local communities. It is better than the frozen pizza you find at your grocery store and depending on your tastes may even rival some of the national chains.

The positives center on the size of the slices and pizza you get for the price. There is simply no comparison when it comes to how much you get for what you pay. If you are watching your calories, a single slice for $1.99 will fill you up for less money compared to other pizza joints. However, the pizza itself is not that spectacular, but if that is your taste then it’s perfect for you.