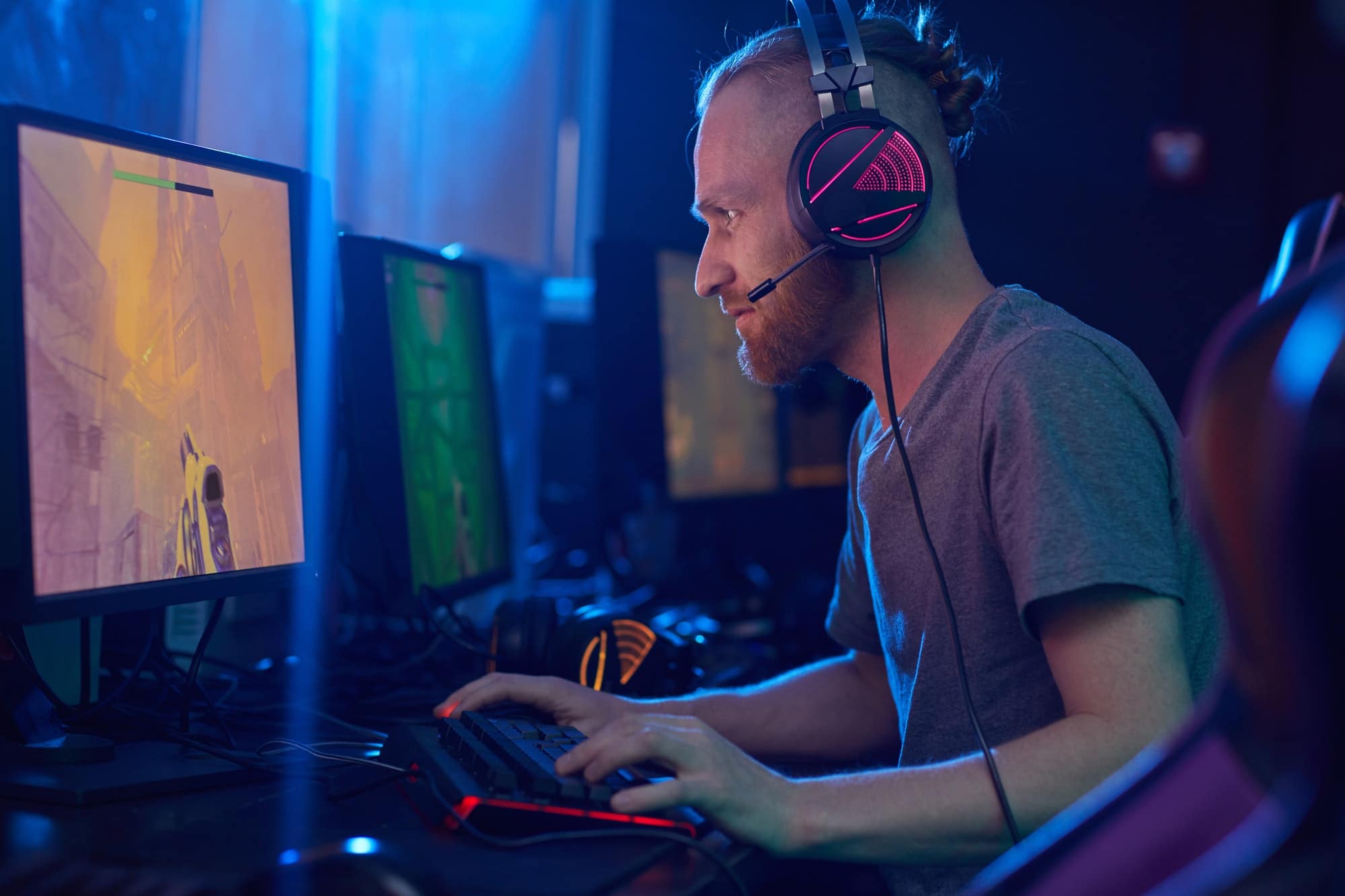 The gaming generations grew up on various consoles from Atari, to Nintendo, Xbox, and Playstation. Yet, most recognize that consoles are limited in ability to the ever-evolving gaming PCs that are known to soar high above in comparison to any TV bound system. So what is the average price of a decent gaming pc?

Most gaming PC cost between $600 to $1000 USD for a computer that will run all games at low to medium settings. More expensive gaming PC cost anywhere from $2000 USD or higher in terms of aesthetic and better function.

Unlike simply going to the store and buying a boxed machine with the same specs across the board like modern consoles, the creation of a good gaming rig is a little more involved.

Because of this, many prospective PC gamers are confused by the price/performance ratio which dictates how well their rig will run.

When shopping for your first computer, many new buyers seek to budget their beginning pieces and build up their machine over time. Your beginner rigs are generally priced between $300-$800 USD.

This list of machines below will give you a generalized look at the price and parts to examine and determine what fits your budget and desired capabilities:

The barebones rigs are going to be underperforming at best, and at worst may not allow you to play a number of newer or more demanding titles. The higher end mid-rigs will be capable of playing anything, but might lag or be overwhelmed on certain games depending on the settings.

This is something else to keep in mind when constructing or buying your gaming PC: the intensity of the settings you want to play your games at.

On occasion, you might snag deals for mid-range PCs in this bracket on markets like Ebay when someone decides to sell off their PC or are upgrading their own parts and want to get rid of some previously used ones.

Buying slightly used parts can be a great way to save a bit of money on good parts instead of buying them brand new, but be sure to check the life expectancy and ask plenty of questions about the used part before committing to something that might need to be replaced from intensive use.

When you begin getting into prices above $800 USD to $1000, the price range for more expensive rigs will now vary wildly.

This is the point where the budget is based more on the longevity of the parts (to last through newer generations), cooling of said higher end parts, expansion of the system’s memory (both RAM and hard drive space to contain your games), and the aesthetics of the machine’s construction.

Regarding higher end PC parts, these rigs will use the newer GPUs, CPUs, and boards. Each will vary with the generation, but as a general rule the newest parts will obviously be the most expensive, whilst the older parts will still function but lag slightly behind the newer ones.

Tip: Some older parts may not be compatible with newer parts, so always be sure to check the compatibility of your components.

One of the more important pieces of an expensive rig is the cooling systems. A higher end PC will generate a much higher amount of heat than a lower end PC because of the processing power that they’re capable of.

Because of this, the higher end parts usually need a more dedicated cooling system than the lower end parts. These can range from simple fans to dedicated radiators, and finally customized water cooling pump systems that pull away excess heat from every piece.

The aesthetics of a machine are superficial; mostly regarding the cases, the lighting systems (which are popular but unnecessary), and the various extra pieces that one might use to further customize their machine.

These can be anything from a GPU vertical attachment (which will mount your graphics processing unit in a different position) to simple board controllers to dictate what color lights you’ll use, and even the personalization of cases or keyboards.

Depending on how much of an enthusiast you are, or how important your PC’s looks are to you, all of these points in combination can even rise well above $2000 USD.

With the previous information at hand, your PC’s ratio of ability to cost will depend on your personal budget and desires. The person would need to compare their available funds to the potential games they are going to play.

For example, someone that’s going to be playing mainly MOBAs will not need a $2000 dollar machine and would be just as comfortable using a mid-tier rig. While, on the other hand, a potential streamer would likely need a powerful rig to process the strenuous loads that his future hobby will demand.

Tip: Remember that if you’re going to build a PC, you don’t need to buy all of your parts at once. You can put a little money aside at a time and upgrade as needed in your own time. Not only does this save you money in the long-run, but if you’re hard-pressed for time, you can construct it piece by piece, even if you just dedicate one weekend a month to it.

On the other hand, if you’re tighter on cash, a lower-end machine can be a stopgap solution to beginning a PC gaming hobby.

These rigs are usually in the price range of $400 to $800 USD. In general, these machines will still be fine if you plan to play older games or MOBAs, but might not be the best choice for someone who plans on playing all the latest open world RPGs or tactical shooters.

Below I’ve provided a link to one of Linus’s videos on the topic of high vs low end PCs. This would be a great resource for anyone seeking more in-depth information on the decisions of purchasing a gaming PC.

How to Build a Gaming PC for Cheap

As someone who has built several of their own gaming PCs, my personal recommendation would be:

If you’re seeking to build a budget PC, the best mid-way pricing average would be roughly $600. This will allow a notable amount of wiggle room for your potential pieces, provided you shop around for reputable used parts instead of new.

However, if you’re looking to build an expensive rig, I would begin with a pricing average of $1500, to make sure you can afford parts capable of playing at the highest graphical settings.

But again, I have to stress that you also buy parts for an expensive rig that are used instead of fresh from the box, especially if you are planning to upgrade at some point.

Oftentimes, these parts will be marked down from anywhere between 25-50% due to their usage. Just keep in mind that their lifespan may be slightly reduced from a brand new part.

Ultimately, the decision of what you want to build or buy is entirely up to you, your interests, and your budget. What is expensive to you may be cheap to someone else, and that decision is yours to make.

Before starting your list of parts, you should think about what you want to use your PC for, how often you plan to use it, how important looks are to you, and determine what amount of money is reasonable for you to spend on your computer after taking into consideration other expenses that you have.

Determine what parts are the most important to your gaming experience, and what ones you’re willing to budge on or readjust depending on your financial situation at the moment.

Is Gaming PC Worth It?

PC gaming is a hobby as much as it is a leisure activity. In comparison to consoles, one should be prepared to keep their system up to date with new parts and occasional replacements instead of simply buying another console as you would with.

The benefits of investing in a gaming PC outweigh the costs in the long run. A PC has a much wider array of game titles with better graphical fidelity and complexity in comparison to the downgraded titles one would be given on console hardware.

Not only this, consoles have a five-year lifespan which causes older game titles to be rotated out of circulation. If you want to have a lasting experience with all your purchases on one machine, invest in a PC.

Keep in mind, that a PC is upgradable. What you can afford now can be replaced in the future, unlike most electronics you purchase.

Can I use a gaming PC for normal use?

A gaming PC can run all the same software and perform the same work tasks as a regular PC. The increased graphics and processing capabilities of gaming PCs can make multi-tasking and running multiple programs at the same time easier compared to regular PCs making them useful for high-end work.

How long do gaming PCs last?

A gaming PC generally lasts for 4-5 years before the parts start to become outdated for running the newest games at the highest settings. For normal use, and light gaming on mid graphics settings, a gaming PC can last from 7-10 years before needing to be replaced or upgraded.

A good mind-range gaming PC that can run most games at 1080p can be purchased pre-built for $1000. One can also buy all the components and build a gaming PC for $1000. Due to a shortage in graphics cards and CPUs it may be necessary to buy those parts second-hand.

Do Gaming PCs use a lot of electricity?

Gaming PCs use up to 6 times the voltage of a regular PC per year. This amount can vary based on the parts and what software the PC is running. Power consumption can also be reduced by using newer higher efficiency parts and keeping dust to a minimum.

Which is better gaming laptop or gaming PC?

Gaming laptops typically are less powerful than desktop gaming PCs. They also tend to be frailer and more prone to breaking. Since the highest end processors and graphics cards require a lot of space and cooling there are limits to how powerful the laptop processors can be.